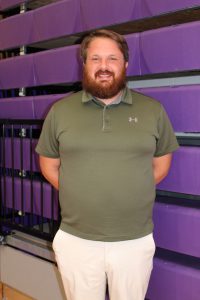 Mr. Brian VanNostrand Jr. is the new Physical Education, Health, Athletics and Extra-Curriculars Director for the Greater Johnstown School District. He joins GJSD from HFM BOCES in Johnstown where he was a special education physical education teacher.

Prior to that, he was an elementary physical education teacher for the Lake Placid Central School District for six years. At Lake Placid, VanNostrand coached boys varsity basketball, and modified boys soccer and baseball. He also was a member of the district’s PBIS committee and a board member for the Lake Placid Youth Athletic Association.

VanNostrand received his leadership credentials at SUNY Plattsburgh, his Master of Science in Sports Administration from Canisius College and his Bachelor of Science degree in Physical Education from SUNY Brockport. He is a graduate of Mayfield High School where he participated in basketball, soccer, cross county, track & field, and drama club (stage crew).

He is married to his wife Heather and together, they have two young children — Dylan and Garrett. Outside of his professional life, VanNostrand says he loves to spend time with his family and their dog, watch/attend sporting events, hike, kayak, and read/learn new things. He considers himself a coffee connoisseur, loves to cook and enjoys listening to music (he’s a big fan of hip hop!)