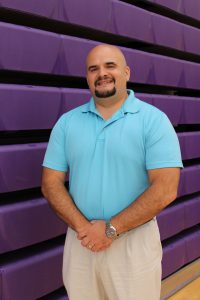 Dr. Matthew Lewis has joined the Greater Johnstown School District as the Assistant Principal for Johnstown Junior-Senior High School. He comes to GJSD from the Greater Amsterdam School District where he most recently served as principal of Lynch Literacy Academy and District Director of Handle with Care, a program that teaches and certifies district staff in de-escalation techniques.

Prior to Amsterdam, Lewis spent seven years in the Mayfield Central School District where he served as both the Assistant Principal for the Elementary School and the Jr.-Sr. High School. He also served as the District Director of Buildings and Grounds, COVID-19 Safety Coordinator, Data Protection Officer, and District 504 Coordinator during different times in Mayfield.

His Doctor of Education (Ed.D) degree was earned at the Esteves School of Education at the Sage Graduate School and he received his Master of Science degree in English Education at The College of Saint Rose. His undergraduate degree is in Criminal Justice from Norwich University Military College of Vermont.

Dr. Lewis’ Sir Bill pride runs deep, as he is a 1995 Johnstown graduate. During his time at Johnstown, he was a member of the wrestling and football teams and was voted “Most School Spirited” during his senior year.  Lewis’ wife Kathi is also a Johnstown graduate. They have two daughters, one of whom graduated from GJSD in 2022 and attends Siena College, and another who currently is a junior at Johnstown.

In his spare time, Lewis likes to read, listen to music, work out, spend time in nature, hike, canoe and fish. He is also involved with local theater and likes to sing.