Knox track and field to be closed to the public from Thursday, Aug. 11 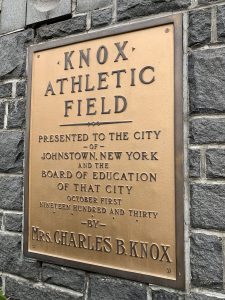 The 15 year-old turf at Knox Field is set to get a major facelift starting Monday, August 15. The project is part of a $2 million capital project approved by the community by a vote of 572-178 this past May, to address several necessary updates to the facilities at Knox, including turf replacement, resurfacing the track to fix weather damage and cracks; and restoring/repairing rusted and weak sections of the wrought iron fence on the South Perry side of Knox Field. The capital project will be paid for out of the District’s Construction Capital Reserve Fund (savings) and was not included as part of the 2022-23 budget.

Equipment and materials for the turf project will be delivered this week, with staging to begin on Wednesday, August 10 and removal of the old turf scheduled to start Monday, August 15. The track and turf field at Knox will be closed to the public starting Thursday, August 11 through, and including, Friday, August 19. Assuming weather cooperates for the project to be completed on time, the District plans to re-open the track and field publicly on Saturday, August 20. 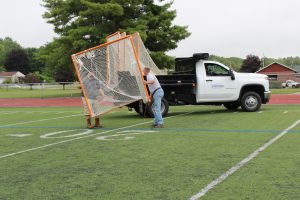 Members of GJSD’s grounds crew remove field hockey goals on Wednesday, August 10 in preparation for the arrival of construction equipment and the removal of the turf at Knox Field starting Monday, August 15.

Other elements of the capital project, including the track and wrought iron fence, are scheduled to start in 2023.

“This project has been on the horizon for quite some time, which means we were able to put together a very conscientious and meticulous plan to implement and pay for the capital project,” Assistant Superintendent Alicia Koster added. “An investment in the maintenance and upkeep of our facilities is really an investment in the future stability of the District as a whole.”

Knox Field currently is used for interscholastic athletics including football, field hockey, and boys and girls soccer, lacrosse and track. The initial timeline of the project called for the turf replacement to take place in late August. District officials were pleased to learn this week that work on the field could be started sooner than anticipated, which will have less of an impact on the District’s fall athletic teams.

“The current turf is 15 years old and is definitely past its prime,” said David Wood, Director of Facilities for GJSD. “We’ve been careful to maintain and care for the turf to extend its life as much as possible, but the wear and tear is simply beyond repair at this point, and now has the potential to be a safety hazard.” 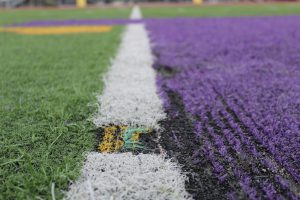 Centerfield sees the most foot traffic from athletic events, which has resulted in the thinning of the turf. In some places, the turf is worn down to the mat below the turf. 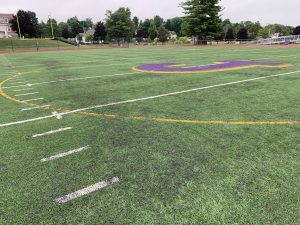 Dark areas of the field show sections of thinning turf. 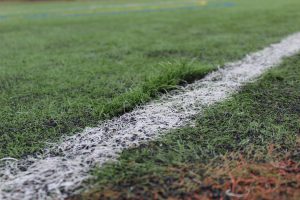 Sections of turf around cut out areas for lines are pulling up and causing safety issues.

The new and improved turf field will showcase a new purple and gold Johnstown logo in the middle of the field, as well as brightly colored end zones featuring Johnstown branding.

“Knox Field has been a cornerstone of this community for nearly 100 years,” Superintendent of Schools Dr. William Crankshaw said. “Knox Field is where our community comes to gather. It is a place of community pride and where we love to cheer on our Sir Bill and Lady Bill athletic teams and celebrate commencement every June. We are taking strides to improve and maintain our facilities, and are excited to reveal a refreshed and improved Knox Field that our community will be able to enjoy for many more years to come.” 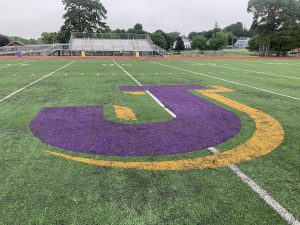 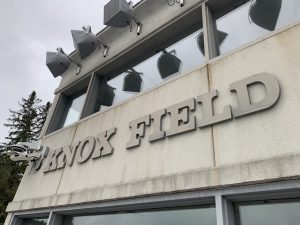