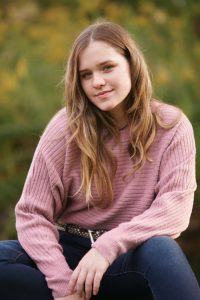 Congratulations to Johnstown senior HANNAH KOSIBA on being selected for the 2021 Adirondack Trust Company Festival of Young Artists showcase!
Hannah wrote an original song called “My Advice” based on the theme of this year’s festival, “Metamorphosis.” Her composition and performance was selected for the showcase, which will be virtual this year with the possibility of a live performance later this spring.
Starting March 31, the 2021 Festival of Young Artists showcase will be featured here: Festival of Young Artists | SPAC
Each year, the festival seeks entries from high school students and youth ensembles who reside in, or are part of a school organization located in one of several upstate NY counties: Albany, Essex, Fulton, Hamilton, Montgomery, Saratoga, Schenectady, Schoharie, Rensselaer, Warren and Washington.
New this year, Saratoga Performing Arts Center is awarding one student in each of three separate categories — Visual Art, Literary Art, and the Performing Arts — with the distinction of “FOYA 2021 Outstanding Artist.” Each of the three artists selected will receive $500 to support the further development of their craft.
After graduating from Johnstown this June, Hannah will attend either the American Musical Dramatic Academy (AMDA) or New York Film Academy in the fall to study musical theater and film.