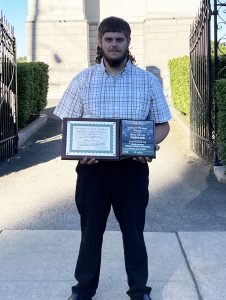 2021 Johnstown graduate Riley Savoie was recently honored by the Capital District Chapter of the National Football Foundation and College Hall of Fame by being named a Scholar-Athlete. The award recognizes high school athletes in the Capital District who have demonstrated outstanding academic achievement, and school/community leadership in addition to their performance on the football field. Riley was also selected as an overall winner and named as one of the “Top 10” from the Capital District chapter.

During his senior year, Riley served as a captain of the Johnstown varsity football team and was named to the first team as an offensive lineman for Class C.

Riley was also an academic stand out during his time at Johnstown Senior High School. He maintained a 90+ average for all four years and graduated 13th in his class. He completed the Environmental Conservation CTE program offered through HFM BOCES and received an award for the highest average in his class.

This summer, Riley will participate in an internship with Utica General Peterbilt. He will attend SUNY Cobleskill this fall where he will pursue an associates degree in Diesel Technology.

Riley is the son of Ron and Karolyn Savoie. 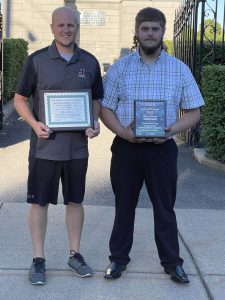