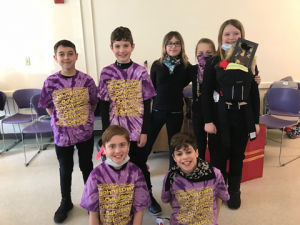 The weekend of April 7, 2018 was a very exciting one for Johnstown’s Odyssey of the Mind program!

Five qualifying teams and their families spent the last weekend of spring break at the State-wide competition in Binghamton, New York. All of the teams did a wonderful job in presenting their problem and competing among the top teams in NYS. The fifth grade Emoji Team finished sixth out of 18 teams at the competition in what is only their first year in the Odyssey program. Way to go! 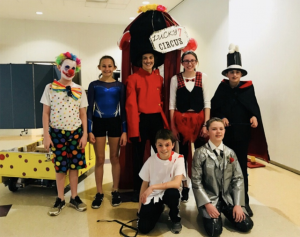 The highlight of the weekend was watching the seventh grade Knox Junior High Vehicle Team (who refer to themselves as the Energetic Engineers) take second place in the State, winning them a trip to Ames, Iowa to compete in the World Finals! This is an amazing honor that these seven students have worked long and hard for! They demonstrated teamwork, dedication, talent, and have always helped to promote Odyssey of the Mind in the Greater Johnstown School District.

With this team’s achievement comes a very large price tag! The Odyssey of the Mind program, together with the Energetic Engineers team members and their families, will be setting up many fundraisers to help pay for the team to attend the out-of-state competition at the end of May. Fundraisers already planned include include a dance at Knox at 7:30 p.m. on April 27; a Johnstown McDonald’s Night from 5 to 7 p.m. on May 2; and an $8 spaghetti takeout dinner from 4:30 to 6 p.m. on May 14 at Pino’s Restaurant in Johnstown.

Donations can be made through the team’s Go Fund Me page, or checks can be made out to the Greater Johnstown School District, with Odyssey of the Mind in the memo line, and mailed to Johnstown Odyssey Coordinator Kristin Meashaw, 110 Warren Street, Johnstown, NY 12095.

Please watch for future ways that you may be able to help this outstanding group of students!