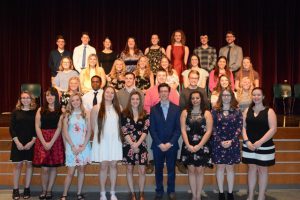 Fourteen students from Johnstown High School were inducted as members of the William A. Wright Chapter of the National Honor Society in a ceremony held at the school on Tuesday, March 27.

NHS members honored their parents for their support and guidance and presented them with a rose. They also honored Mrs. Anne Bagot, teacher and advisor. She was presented a bouquet of flowers and gifts. After the ceremony guests and members enjoyed cake and punch at a reception in the lobby.

The National Honor Society ranks as one of the oldest and most prestigious national organizations for high school students. Chapters exist in more than 60 percent of the nation’s high schools and since 1941 millions of students have been selected for membership. Millions of dollars in scholarships have been awarded to senior members since 1945 by the sponsoring organization, The National Association of Secondary School Principal’s (NASSP).