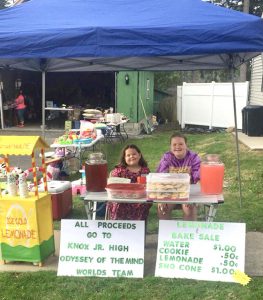 When the Energetic Engineers (one of Johnstown’s Odyssey of the Mind teams) qualified to compete at the Odyssey World Finals, they knew a great deal of fundraising was going to need to be done in a very short period of time. These students are the first Johnstown team to ever advance to the world competition – a huge honor that comes a huge price tag.

Many adults and local businesses have been reaching out financially to help the Knox Junior High seventh graders make the trip to Ames, Iowa later this month, and we are beyond thankful for their support. However, an especially touching story involves a special group of Johnstown elementary students, starting with Warren Street sixth grader Mollie Kortz.

Mollie has been on an Odyssey of the Mind team herself for the past three years.  She and her team also competed at the State Finals in Binghamton, NY, where the Energetic Engineers won their spot at the World Finals. Shortly after returning from the state competition, Mollie decided she wanted to help the Knox Odyssey team.  She recruited her fellow sixth grade friends and neighbors Cole and Caroline Krempa, Lucy LoDestro, and Parker Klingbeil. Other helpers included Pleasant Avenue kindergarteners Madison Kortz and Hope LoDestro. The seven girls took turns working all Saturday, May 5th, selling goodies at their lemonade stand on 4th Avenue. Many Facebook posts encouraged community members to stop by and support the cause. The girls offered delicious homemade cookies, lemonade, and even sold snow cones in the afternoon. 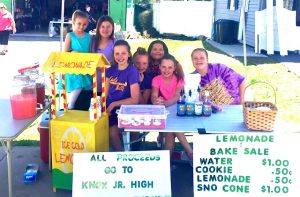 Over the years, Mollie has had many lemonade stands during Johnstown’s citywide garage sale to help those in need.  Her parents report that until this year, the most she and her friends had ever made was around $55. Some of the lucky recipients in past years have included ALS, the Melanoma Research Foundation, and Baby Jax (a local boy needing medical treatment). The girls’ hard work and cheerful service on May 5th brought in about five times the usual profit, allowing them to donate $251.50 to the Knox World Finals Odyssey Team!

Warren Street teacher and Odyssey of the Mind advisor Mrs. Kristin Meashaw said “I know that students and staff recently received t-shirts that read ‘#kindnesscounts’.  I think this is a perfect example of how these girls are living what they have learned both at home and at school. Thank you to all seven girls for their outstanding compassion and for being positive role models for their peers.”