Residents of the Greater Johnstown School District will be asked to vote on three separate propositions on Wednesday, Aug. 25, including the potential sale of the former Jansen Avenue School and the creation of two separate capital reserve funds.

What will be on the ballot?

The District seeks authorization to sell a portion of the real property located at 305 Jansen Ave. in Johnstown, N.Y., commonly known as the former Jansen Avenue School, at a minimum price of $695,000 (minus real estate and legal costs). The sale includes the building and playground, but does not include Briggs Field.

Superintendent of Schools Dr. William Crankshaw described the sale of the former Jansen Avenue School as a critical step in the ongoing initiative to rightsize the district’s resources.

“GJSD’s student enrollment has declined significantly in the last several decades. The closing of Jansen Avenue — along with repurposing Glebe Street for P-TECH, and the Knox Building for an expanding pre-K program and district offices — are part of a strategic plan that has helped the District reallocate resources internally to the benefit of both our students and our taxpayers,” he said.

“We’re pleased that most of the land around the Jansen Avenue building, including playing and practice fields, will remain part of the Johnstown campus and we will continue to use that space in the near future to hold interscholastic athletic events and community gatherings,” he added.

The Jansen Avenue School was built in 1967 and was used by the District as an elementary school until 2009. It housed the HFM BOCES P-TECH program for several years but has been vacant since the spring of 2020.

The GJSD Board of Education approved the sale of Jansen Avenue in June of this year, but the community must approve moving forward with the transaction before the sale can be completed. 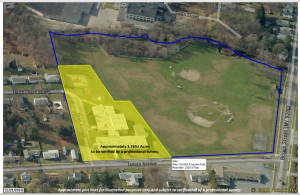 The proposed sale of the Jansen Avenue property includes the former Jansen Avenue school building and playground. The area measures approximately 3.565 acres (to be verified by a professional surveyor) and is highlighted in yellow. In the proposed sale, the area around the building outlined in purple, including Briggs Field, would remain property of the Greater Johnstown School District.

The District is asking the community to authorize the creation of a Construction Capital Reserve Fund, which could be used in the future for smaller capital projects such as construction, general improvements, reconstruction, renovations or additions to the District’s buildings, grounds and athletic fields. This fund would not exceed $3 million and would be created by depositing unallocated fund balance — which is money left over at the end of a school’s fiscal year — into the reserve fund, a move that requires Board of Education approval. The probable duration of the fund is 10 years. Any future expenditure from the Capital Construction Reserve Fund would require voter approval.

The District seeks authorization to establish a reserve fund to be known as the Capital (Bus Purchase) Reserve Fund to finance the cost of purchasing future school buses and vehicles. The fund will not exceed $3 million, and the probable duration of the fund is 10 years. Starting with the 2021-22 school year, and for each of the next nine fiscal years, transportation aid received annually from the state of New York and unallocated fund balance from the General Fund will be deposited into this account, as approved by the Board of Education. Money spent from the Bus Purchase Reserve Fund must be approved by voters.

Why is it important for a school district to establish and fund reserves?

Similar to a savings account, reserve funds allow a district to save for unexpected expenses and contribute to a district’s long-term fiscal health by planning ahead and saving incrementally for the future. Reserve funds help mitigate the financial impact of major, non-recurring or unforeseen expenditures on a school district’s annual operating budget.

Who is eligible to vote? You may vote if you (1) are at least 18 years old; (2) are a U.S. Citizen; (3) have been a resident of the Greater Johnstown School District for the past 30 days; and (4) are a registered voter. Not sure if you are registered? Check here.

Need an Absentee Ballot? Absentee ballots will automatically be sent to anyone who is registered as a permanently disabled voter. Any other qualified voter wishing to vote by absentee ballot must first submit an application. Applications can be downloaded from the forms page of the district website or voters can call 518-762-4611 ext. 3119 to request an application be mailed to them.

Completed absentee ballots must be received in the District Clerk’s office by 5 p.m. on the day of the election in order to be counted by the election inspectors.